The Legend of the White Hart, and the Basing Stone 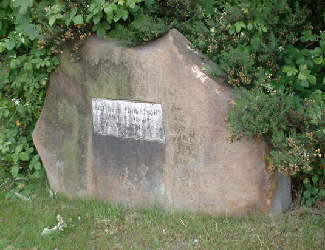 On the A30, near the Jolly Farmer roundabout there's a stone with a plaque on it saying something about the "Legend of the White Hart". If you're going from Bagshot to Camberley on the A30, it's  on the left just before you get to the Maultway turning.

Does anyone have any information about this?

I stopped off at the site and found that the inscription reads "SITE OF BASING STONE AND LEGEND OF THE WHITE HART".  The original stone 'disappeared' while some road works were being done in the 1950's - hence this is "the site of ..".  The stone is near where the parish boundary crosses the A30 (an old coaching road).  In my wanders I have found similar stones elsewhere on the parish boundary and so my guess is that this is a boundary stone.  location

Andrew Pollard's enquiry turned up while I was also searching for further information on The Legend of the White Hart (as mentioned on the Basingstone). As he mentions, the Basingstone is meant to mark the limit of the Parish Boundary.

I do recall reading about this in the local reference section of Bagshot Library*. I quote "Legend says that near the Basingstone (Beausantstone) Richard II was attacked by a wounded stag while hunting. He was apparently saved by a White Hart that came between them. In gratitude the King is said to have caused four hostelries with the sign of the White Hart to be erected in the forest at Bagshot, Chobham, Frimley, and Pirbright."

The Pirbright pub took some locating as the owners have changed it's name to the Moorhen! I wonder if this is against royal decree and therefore an act of treason?? I hear that there was much local feeling when the name was changed but I'm not sure if the treason argument was used to save the name. Interesting thought though.

From Veleda : I noticed travelling through Blackwater on the A30 the other day that there is a White Hart house and a parade of shops called White Hart Parade. Any connection with the other White Harts does anyone know?

From Allend : I would observe that there are, or were, a great preponderence of "White Hart" pubs and hotels along the whole length of the A30.  I've seen Sir Gawain and Edward III associated with the Hart, but not Richard II.

I also found some other local history books on which the following account is based.

The White Hart is the name of a pub in Guildford Road, Bagshot.  The present building is most odd - the unusual single storey design to the front part of the building is attributable to the war more than half a century ago.  A German bomber aiming for the railway viaduct missed and hit the pub and the houses across the road. The bottom half of the pub was patched up to return it to service!

Ann Sargeant (nee Batchelour) writes : As a very young child circa 1950 I remember visiting someone who lived opposite the White Hart. I recall that the bank of the nearby stream was looked after very well with flowers and statues of gnomes. A member of the family we visited had been severely injured by flying glass from one of the bombs that had dropped nearby. 688.906

Andy Wheeler asks Does anyone remember or have any sort of record of the couple who ran the White Hart public house in Bagshot between the wars? Their name was Mr & Mrs Walker  and I am their great grandson. Jan10
If you can help Andy or have and other memories to contribute then please reply using the message pad at the foot of the page.

Roland reports that at the 1881 census the occupier, described as a beer retailer, was 51 year old Charles Perry. [Feb 16]

The Catholic Church is built on the site of the houses that were destroyed. 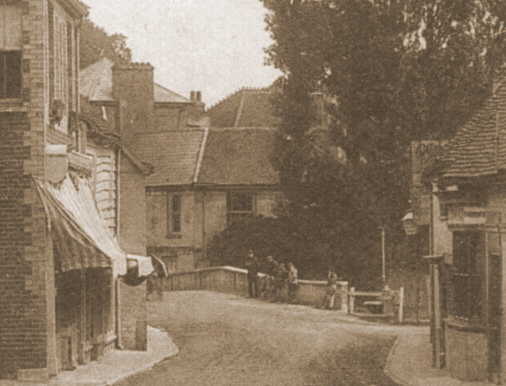 But this was not the location of the original White Hart - that was a coaching inn dating back to at least the mid 1700's on what is now called Bridge Road, though at the time there may have only been a ford over the Windle Brook. The first brick bridge was built in 1768.  The White Hart was not the first inn on the site, records show that it was preceded by 'The Ship' and befor that 'The Stag and Hounds'.   location

The property ceased to be an inn in 1854 (when the inn moved to Guildford Road) and became known as Hartdene.

This picture (from the very early 1900's and taken from the High Street) glimpses Hartdene beyond the bridge over the Windle Brook. This narrow street was, until Bagshot bypass was built in 1925, the route of the main London to Penzance (and Lands End) road, now classified as the A30.

Jethro asks if anyone has any information regarding the White Hart Inn, as it appeared in 1614 when his forefather, Edward Fladgate, was the innkeeper. 6142.1206

Ron Frost tells us "In 1958 I worked with a man called Frankie Wellman who was in his 70's and he could remember when the London Road was an unmade road ." Mar06

This picture of Bagshot Bridge reminds me of something my grandfather told me about his first job as a Bakers boy in Bagshot. One of his tasks was to take the long handled shovel shaped things that they got the bread out with and cool them across the road in the stream. This would have been during the first world war. I imagine as he would have been 11 - 15 at the time. Theres no way of knowing if the bakers was one of the buildings on the left of the picture or if he was coming from Half Moon street. Ironicallly for me the lad standing has something of my grandad's stance - but it could be anyone! ref599

Ron Frost wrote: Hartdene, a very lage building, was used during the war and after by Sid Morris for furnature storage. 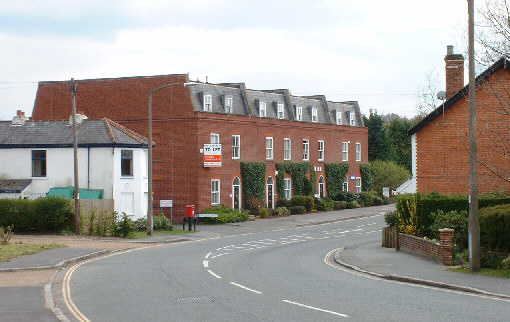 Hartdene, by then in a delapidated condition, was demolished  in 1949 to make way for a petrol filling station (called Hart Dene). Buildings behind and to the side of the filling station continued to be used by Morris's removals business, ultimately incorporated with Allders.

The filling station has in its turn been replaced by an office block (called The Denes and seen in the centre of this 2001 picture).  Morris's yard was razed and redeveloped as retirement flats.

This latter picture is taken from the other direction than the old one, the bridge being out of view to the right of the office block.

The white building was outbuildings associated with the White Hart Inn's stables.

Graham Small wrote: I believe Morris started as coal merchants & turned on / off the street lights when gas lights came to the village. Their office was at the top of Bridge Road and had a storage yard at Hartdene on Bridge Road where they started the removal company. I believe Sid Morris later lived in a bungalow in Waverley Road until he died. His son John ran the removal business until it was taken over 2 or 3 times. The yard behind the office was used by a caravan sales called Fisher caravans who later used the garage and yard next to Hartdean Cottage until they moved in the 70s. The house Hartdean Cottage has history too - it was a stables for the Manor House that stood on the site of the garage and I was told by my grandad he used to play in the cellar of the house until one day he and a friend found a loaded duelling pistol that went off and he never went back. He also told me Dick Turpin had stayed in the stables when passing through. [Nov 16]

The white building was demolished in May 2002, ending the history of the old White Hart Inn.

It has now been replaced by yet another office block, albeit with a frontage that has some similarity to the old building.

Russell has written : Some of the bricks  were salvaged from the demolition and used to build a garden wall. Some of the bricks are still painted white. So the old White Hart's spirit (no pun intended) still remains in one corner of Bagshot. 6136.1106

I was once talking to one of Bagshot's older residents and observed that most of the housing was post-war, and all the pubs clearly pre-war, and I commented that that was a lot of pubs for the population.  His reply was that there used to be even more pubs than there are now.  If similar trends have occurred elsewhere then it is entirely possible that two White Hart pubs have ceased to exist. I have a further page about Bagshot pubs.

The Basingstone and The White Hart Inn have another link - the highwayman known as the Golden Farmer lived near the stone and was reputed to have been captured in the White Hart.

Many of my pages have been prompted by, or include questions or information from, my readers. If you can add anything to the above please write to me using the message pad below.

This page is part of the Bagshot village web site.

Data provided only for personal background information. While every effort has been made to provide correct information no assurance as to its accuracy is given or implied. Check any facts you wish to rely upon.